Holochain DNAs specify validation rules for every type of entry or link. This empowers agents to check the integrity of the data they see. When called upon to validate data, it allows them to identify corrupt peers and publish a warrant against them.

Data validation rules are the core of a Holochain app. They deserve the bulk of your attention while you’re writing your DNA. 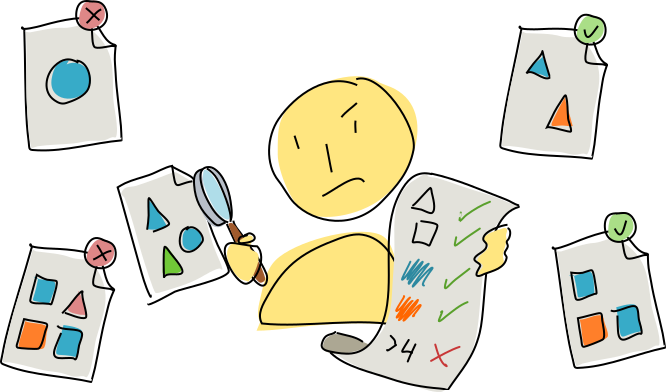 Validation: the beating heart of Holochain¶

Holochain is the engine that allows peers to move data around, validate it, and take action based on validation results. Your DNA is simply a collection of functions for creating, accessing, and validating data. The design of these functions is critical to the success of your app because they define the membranes of safety between the user and the stuff she receives from others via the DHT. An agent’s running DNA prevents her from creating invalid data and protects her from accepting other people’s invalid data. Well-designed validation rules protect everyone, while buggy validation rules leave them vulnerable.

The DHT offers a shortcut—it remembers the validation results of existing entries. You can ask the validators of the parties’ previous transactions if they detected any problems. You can assume that they have done the same thing for the transaction prior to those and so on. As long as you trust a decent number of your peers to be playing by the rules, the validation results attached to the most recent entry ‘proves’ the validity of all the entries before it.

You can also consult the agent activity authority for any peer you’re unsure of. They hold a copy of any past evidence of malicious activity, along with a record of all of the peer’s source chain headers that show whether they’ve tried to change their history.

A validation rule is just a function that receives an element (and any supporting data necessary for validation) and returns success or failure. You’ll remember that an element is an action, not a thing, so your function is validating whether the element’s author should have performed that action .

The validation function is called in two different scenarios, each with different consequences:

We’ll carry on with the DHT illustrations from chapter 4 to show what happens when data is written, but let’s add a simple validation rule: the “word” entry type has a validation rule that says that it can only contain one word.

When you commit an entry, your Holochain conductor is responsible for making sure you’re playing by the rules. This protects you from publishing any invalid data that could make you look like a bad actor.

You can see that author-side validation is similar to how data validation works in a traditional client/server app: if something is wrong, the business logic rejects it and asks the user to fix it.

When an authority receives an entry for validation, the flow is very different. The authority doesn’t just assume that the author has already validated the data; they could easily have hacked their conductor to bypass validation rules. It’s the authority’s duty and right to treat every piece of data as suspect until they can personally verify it. Fortunately, they have their own copy of the validation rules.

Here are the two scenarios above from the perspective of the DHT.

Let’s say Alice has taken off her guard rails—she’s hacked her Holochain software to bypass the validation rules.

The purpose of validation is to empower a group of individuals to hold one another accountable to a shared set of rules. This is a pretty abstract claim, so let’s break it down into a few categories. With validation rules, you can define:

How validation rules are defined¶

Data can also be retrieved from the DHT to support validation. Once it’s done its work, the validation function can return one of three values:

All actions (create, update, delete) on all entry types (app entries, agent ID entries, and capability grants/claims) can have different validation functions, which follow a ‘cascade’ of specificity. Holochain calls all the matching validation functions it can find for an entry type, starting with the most specific, until one of them returns an error. The cascade for entries looks like this:

For instance, you could have two validation functions for the “word” entry type:

Links also have their own validation functions, validate_create_link and validate_delete_link, which are called for any links produced by the current zome. Because links don’t have a type, if you want to apply different validation rules to different types of link, your function will have to switch on different kinds of link based on the base, target, and tag.

Validation functions return a boolean value, meant to be used as clear evidence that an agent has tampered with their Holochain software. They should be deterministic and pure so that the result for a given commit doesn’t change based on who validated it, when they validated it, or what information was available to them at validation time. And nothing should ever be invalidated once it’s been published and validated. As mentioned before, an element contains an action taken by an agent, so the validation function’s job is to decide whether they ought to have taken the action at that point in time. This means validation functions aren’t appropriate for soft things, like codes of conduct, which usually require human discretion.

If an agent is committing an element to their source chain that depends on DHT data, it’s their job to make sure those references exist at commit time and explicitly reference them. The validation function doesn’t need to revalidate those dependencies, though; Holochain will use its own heuristics to determine the trustworthiness of other validators’ claims when it retrieves the data.

When validating an element whose validity depends on other data on the DHT, be careful to not introduce subtle sources of non-determinism. The DHT is eventually consistent, and that means that data either definitively exists or hasn’t been seen yet — there’s no way to determine that a piece of data definitively doesn’t exist.

For element data that can’t be retrieved, the validation function should return ‘unresolved dependencies’ rather than a validation failure. This signals that the function hasn’t failed; it’s just waiting for the data to appear.