Applications built with Holochain are highly modular. This makes it easy to share code and compose smaller pieces together into larger wholes. Each functional part of a Holochain application, called a DNA, has its own business rules, isolated peer-to-peer network, and shared database.

A good understanding of the components of the tech stack will equip you to architect a well-structured, maintainable application. Because Holochain is probably different from what you’re used to, it’s good to shift your thinking early.

Perhaps Holochain’s most important difference is that applications are completely centered around the individual — and networks of individuals. The purpose of a Holochain application is to create a network of individuals, interacting freely with each other, playing by a shared set of rules. This is possible because everyone, whether human or bot, is running their own copy of the application and connecting directly to their peers. 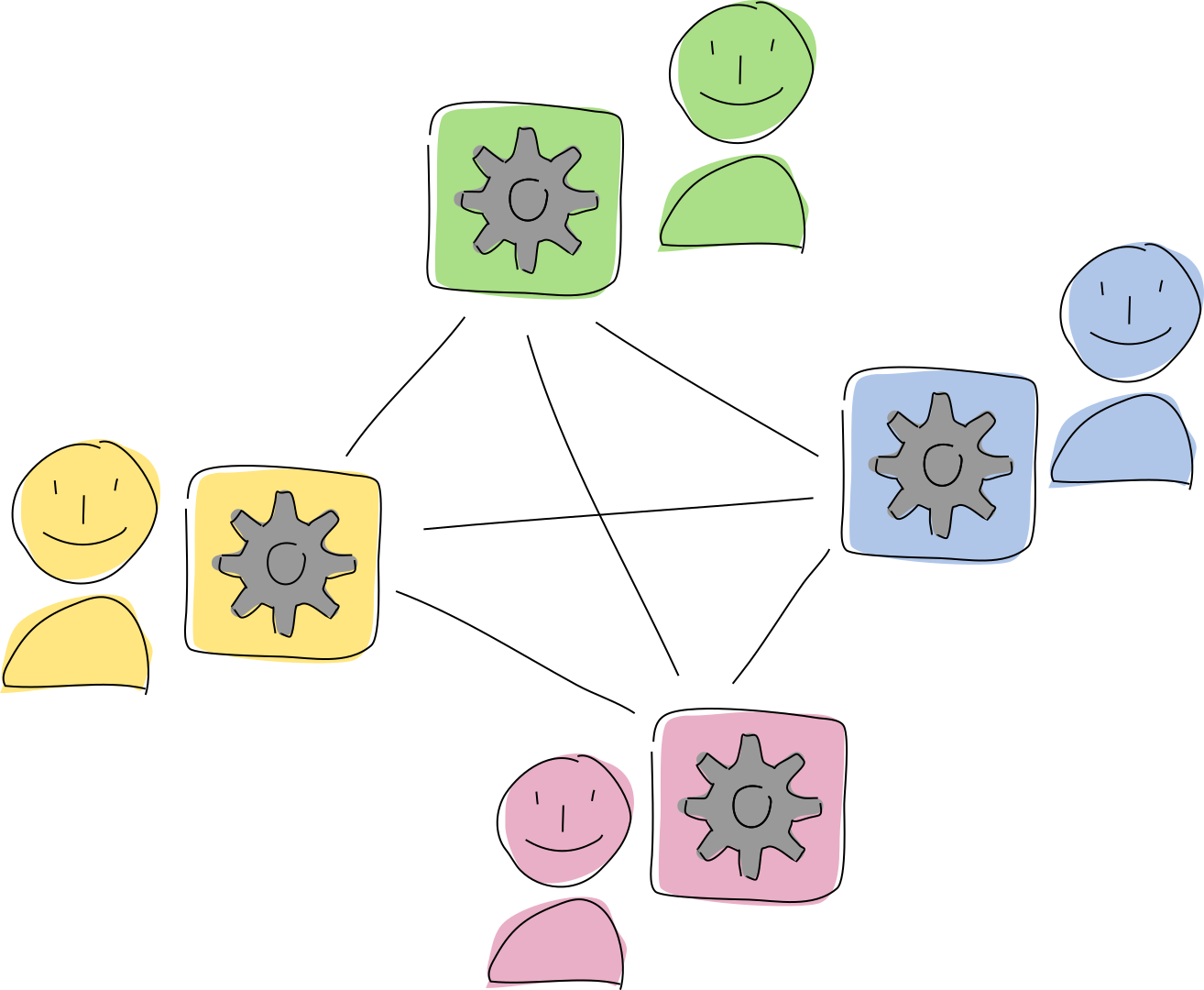 So the term ‘user’ doesn’t feel quite right for Holochain, where the ones who use the application are also the ones who keep it alive. Let’s call them ‘agents’ — or better yet, ‘participants’.

How do you know other participants are playing by the same rules as you? As we explored in The Basics, all you have to do is look at the data they create and share. If their data doesn’t pass your copy of the rules, they’re playing a different game and you should ignore them.

These data integrity rules create a membrane between a participant and her peers. They define what data she can and can’t create, and they help her recognize rule-breakers. 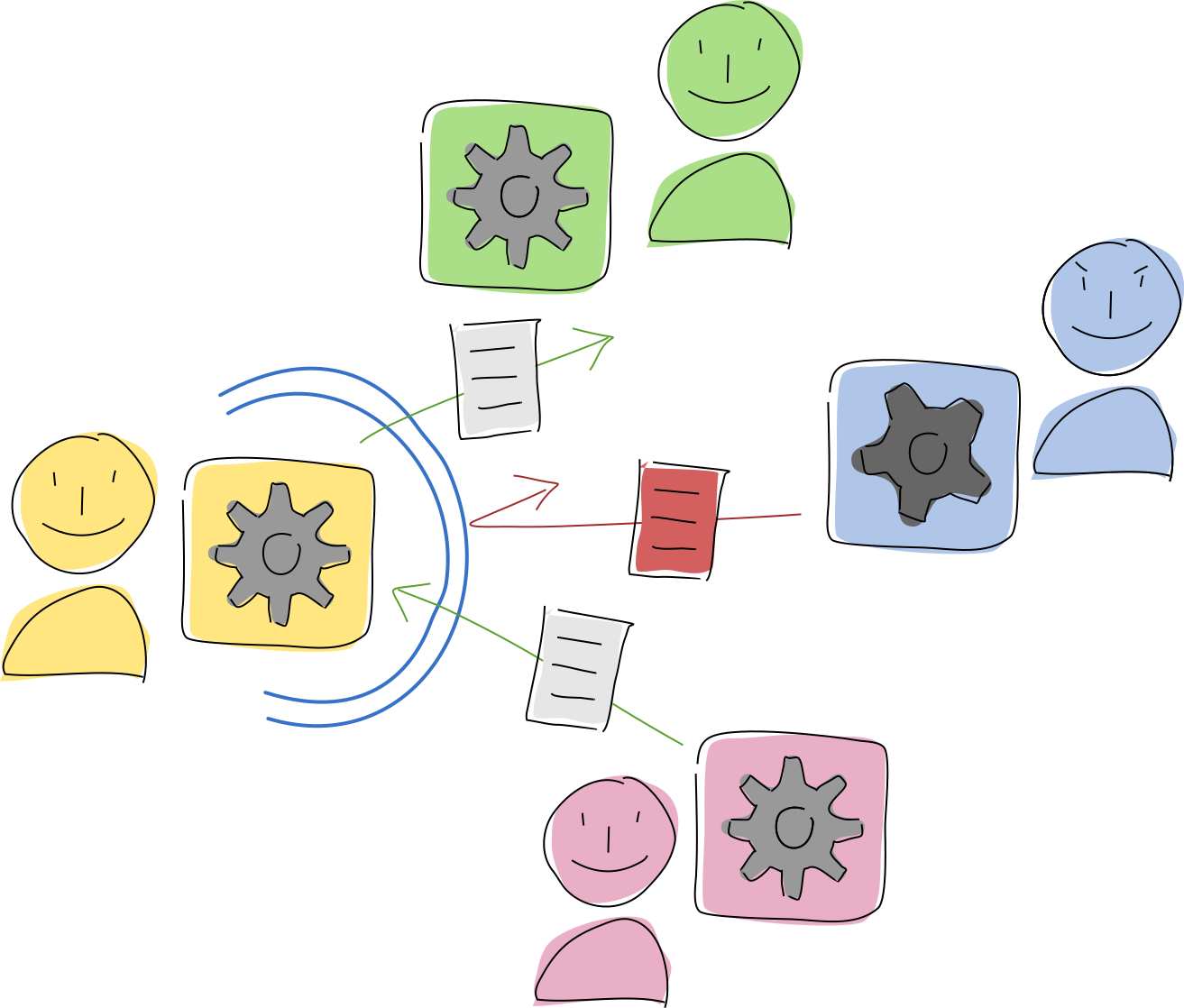 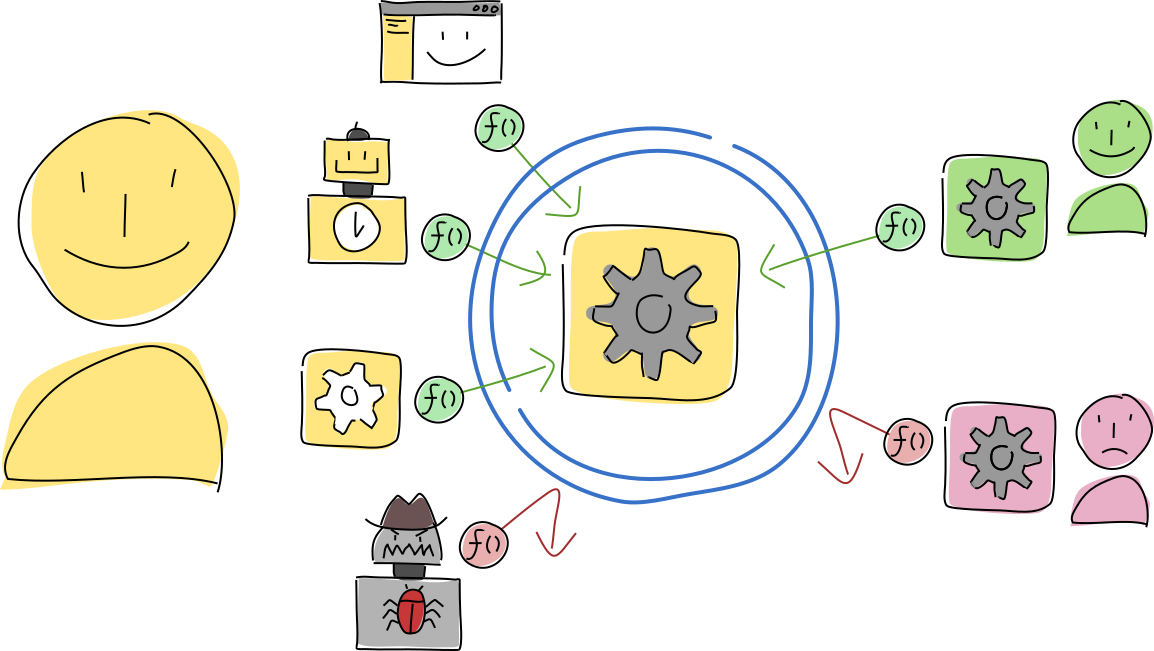 Layers of the application stack¶

Holochain handles a lot of things for you, keeping your workload minimal. That’s why we call it a framework. You rely on Holochain for things like data persistence and a peer-to-peer networking and communication layer, and get on with building your application and business logic.

Now, let’s get into the details of all the components of a Holochain app, and how they fit together.

Now let’s quickly introduce all the terms, so you’re familiar with them when you encounter them. A client running on a participant’s device talks with their conductor, which runs multiple hApps. Each hApp is made of one or more cells, which are the live instances of DNAs that run on behalf of the participant. These DNAs, in turn, are made of one more executable zome modules.

All clear? Don’t worry; it’ll make more sense as we dig in.

A client on the participant’s device, such as a GUI or utility script, talks to their Holochain conductor and its running hApps via remote procedure calls (RPCs) over WebSocket. A hApp can also send signals back to the client; signals are useful for real-time event notifications.

The client is like the front end of a traditional app and can be written with whatever language, toolkit, or framework you like. One hApp can have multiple clients, and one client can talk to multiple hApps. You can even make a headless client, like a shell script or scheduled task. This client and its related hApp make up a complete application. A lot more of the business logic of your application might end up being written in the client than you’re used to, and we’ll explain why later.

The hApp is hosted in the participant’s conductor. It’s the runtime that sandboxes and executes hApp code, handles cryptographic signing, manages data flow and storage, and handles connections both locally to clients and remotely to peers. When the conductor receives a function call, it routes it to the proper hApp.

In some ways, you can think of the conductor as a web application server, but one that runs on every participant’s device. It is called the conductor because in one sense it ‘leads the orchestra’, and in another sense because it has good ‘conductivity’.

Participants in a hApp communicate with each other privately and securely in peer-to-peer networks thanks to the conductor. The conductor can manage more than one set of private/public key pairs, representing either different people or different identities for the same person, and the same key pair can be used with more than one hApp. 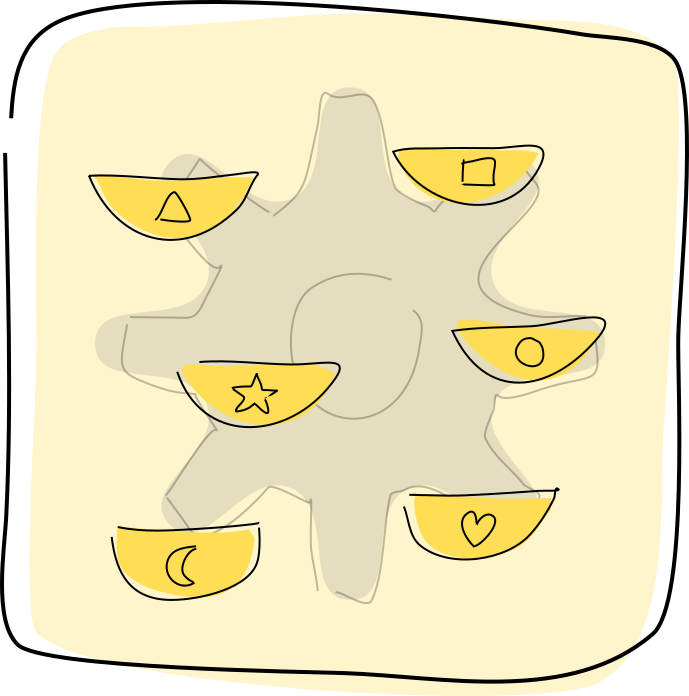 A Holochain application or hApp allows a person to easily install and manage a suite of functionality, such as chat, accounting, or project management. A hApp is often made of multiple components, each providing an aspect of functionality, and it has a slot for each. 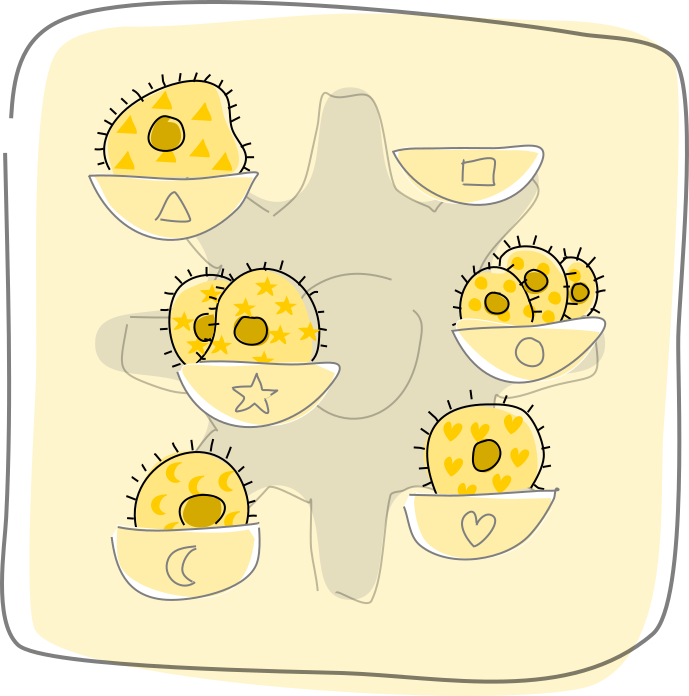 Cells occupy slots in a hApp. Each cell is a combination of a participant’s unique cryptographic key pair (their agent ID) and a DNA. Within one participant’s instance of a hApp, all cells share the same agent ID. Each cell acts as the participant’s personal agent — every piece of data that it creates or message it sends, it does so from the perspective of that agent.

Each cell stores its own agent history and is a member of an isolated network along with other cells that share the same DNA. This is useful for creating separate spaces inside a single hApp — individual project workspaces or private chat channels, for example.

When a client calls a function in a hApp, it specifies the cell ID, which is the hash of the DNA plus the agent ID, along with the zome name, function name, and function input payload. 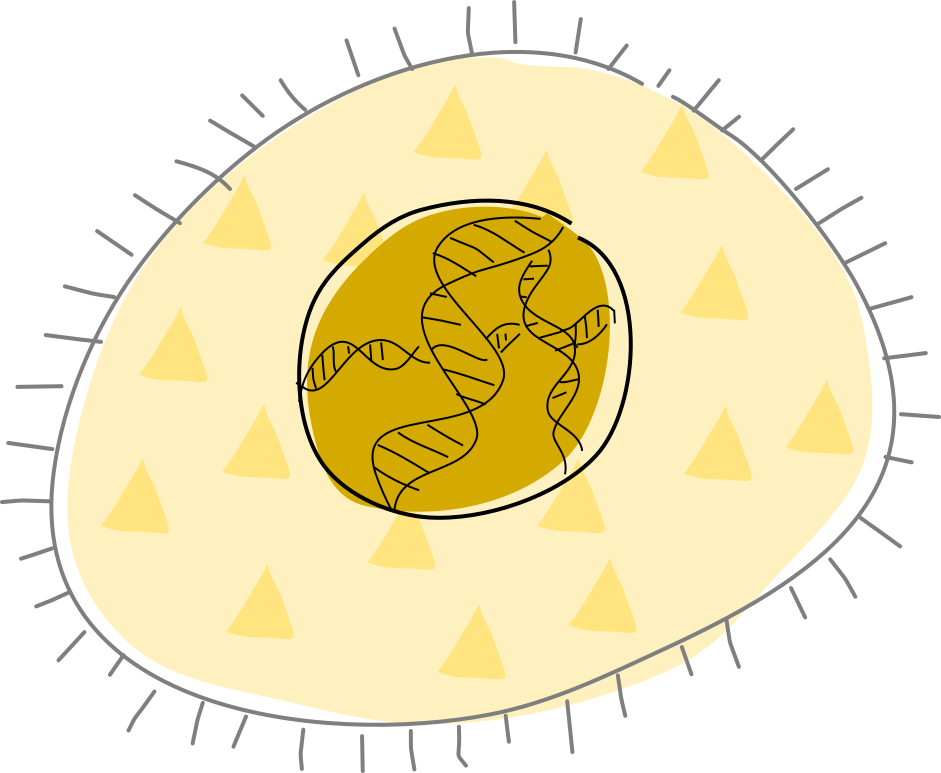 A bundle of executable code that makes a unit of functionality in a hApp is called a DNA. You can think of it like a microservice that creates a data access and integrity layer around personal and shared data. It serves as the ‘rules of the game’ against which peers can do validation and enforcement.

The DNA can also contain metadata: a name, description, unique ID, and properties. The unique ID and properties can be changed either in a text editor or at installation time. The unique ID can be changed to clone a DNA, creating a new cell with identical functionality but an entirely separate history, network, and shared database. The properties, on the other hand, can also be changed to clone a DNA, but also direct the DNA’s executable code to change the new cell’s runtime behavior (similar to configuration parameters).

In fact, even the slightest alteration of any part of the DNA will cause a cell to be cloned. Consider source code and configuration changes carefully, because each modification will create a new DNA with a new cell interacting in a separate network. This may require some sort of migration strategy to move or access data between old and new cells. 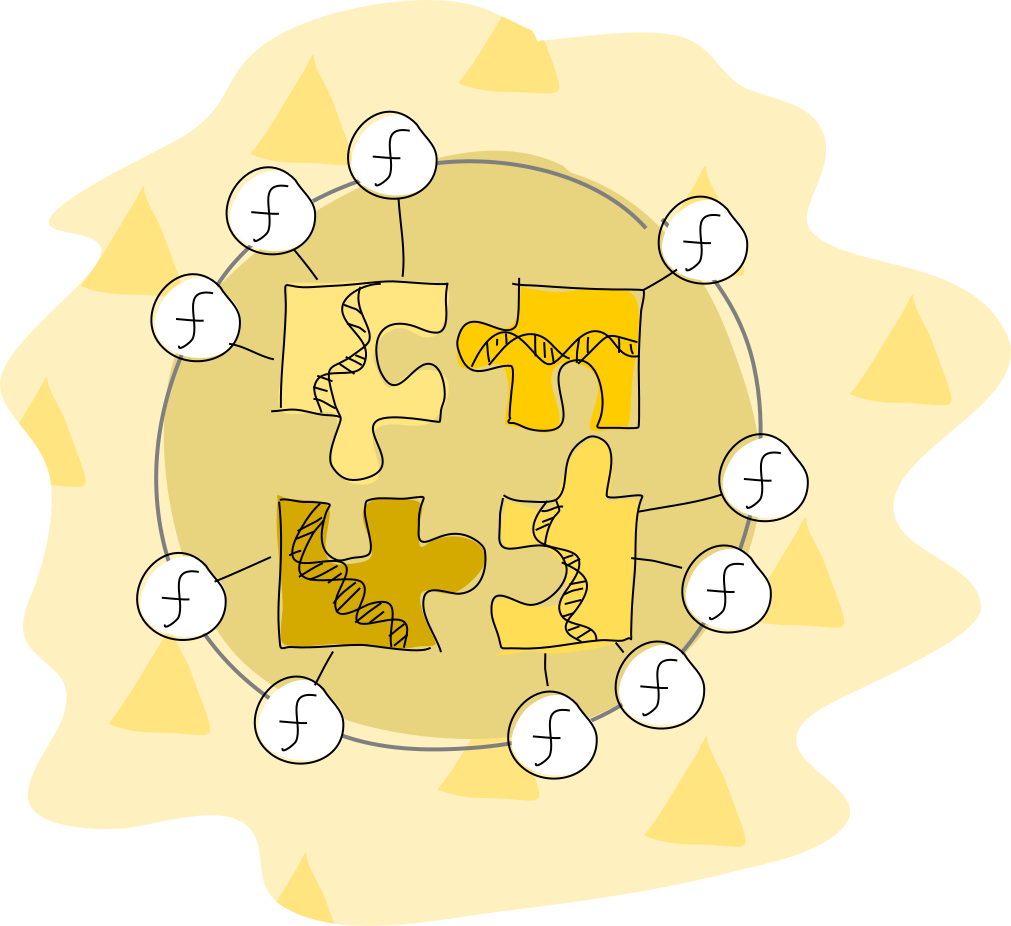 The executable code modules in a DNA are called zomes (short for chromosomes), each with its own name like profile or chat. The zomes define the core business logic in a DNA, exposing their functions to the conductor.

Some of these functions are ‘hooks’ that Holochain calls automatically, such as an initialization function or validation functions related to data types defined in the zome.

Other functions are invented by the developer, have arbitrary names, and define the zome’s public API. The conductor makes this API available to other zomes within the DNA, other DNAs within the hApp, and, as mentioned earlier, clients running on the participant’s machine and other agents on the DNA’s network. The developer can give a participant the ability to control access to their cell’s API via capabilities.

All of these functions are run from the perspective of the individual participant. When a client on Alice’s computer calls a function that writes data, it calls that function in her own cell, writing data to her personal store. Unlike with cloud and blockchain, there is no objective, global-level actor. Things happen only when someone causes them to happen.

All functions in your DNA start with a fresh memory state which is cleared once the function is finished. The only place that persistent state is kept is in the user’s personal data journal. If you’ve written applications with REST-friendly stacks like Django and PHP-FastCGI, or with function-as-a-service platforms like AWS Lambda, you’re probably familiar with this pattern.

That’s the entire stack of a Holochain hApp. Let’s review, this time from the inside out:

You can see that Holochain is different from typical application stacks. Here’s a summary: