8. Calls and Capabilities: Communicate With Other Components And Peers¶

Application components can call a DNA’s functions. On one agent’s device, clients can call functions in cells, and cells in the same conductor can call each other’s functions. Within one DHT, cells can call other agent’s cells, allowing agents to delegate their agency to others.

Web 2.0 flourished thanks in part to ‘mashups’, or publicly accessible APIs that allowed apps and services to use each other’s data. Holochain enables a richer sharing of functionality and data between apps, anchoring the experience in the end-user’s agency. This increases application development velocity and encourages the development of standard, shared component libraries. Remote calls, on the other hand, allow agents in one app to interact privately without publishing any data to the DHT.

Client, inter-zome, bridge, and remote calls: who can call whom¶

There are four scenarios when a zome’s functions might be accessed. In every scenario, they’re just a remote procedure call. You might remember from Application Architecture that all back-end functionality of a Holochain application is contained in the DNA, or rather, the individual zome libraries in the DNA. Any externally exposed functions in those libraries are exposed in turn by the host as the DNA’s public API.

An agent makes things happen in their cell by calling one of its public functions through the app interface, which is a WebSocket port that the conductor makes available on the agent’s device. The thing making the calls is a client of some sort — a GUI, a shell script, a long-running service, anything that can speak WebSocket. The important thing to remember is that, because the conductor only exposes the app interface on the local machine, the UI has to live on the local machine. This helps discourage anyone from impersonating the owner of the cell. 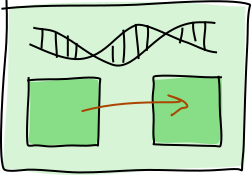 Although zomes are libraries in one DNA, they don’t have direct access to each other’s functions. They can still call each other, though, via the call host function.

A bridge call allows an agent’s cells on one machine to communicate with each other. This is useful for combining the functionality of multiple DNAs into one app. Because Holochain is centered around the agent, it makes more sense to say “Alice’s app instances are talking to each other” than “app A is talking to app B”.

As we’ve seen, a client can talk to cells too, and it could certainly bear the responsibility for connecting multiple cells together. But it can’t offer the same correctness guarantees that direct calls between cells can offer: the source chains of both cells are ‘locked’ for the duration of the call, and the conductor provides the assurance that the code that cell A thinks cell B is running is actually what it’s running. This means you can better reason about the state of each instance, which is important for things like financial transactions. 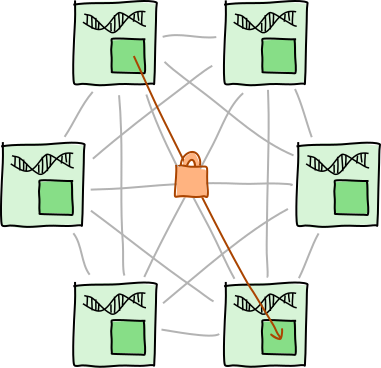 A remote call allows agents running the same DNA to call each other’s functions. When Bob’s cell makes a remote call to Alice’s cell, it’s Alice’s cell doing the work, which means that everything that happens — reads and writes, signals, and even calls to other cells — happens from Alice’s perspective. Essentially she’s delegating a bit of her agency to him.

Alice and Bob can use this to do all sorts of useful things:

How to secure functions against unauthorized use¶

At first sight, this seems pretty risky. Giving your agency away to someone else seems like it should be protected somehow — which it is.

Holochain uses a variation of capability-based security to protect a cell’s exposed zome functions. In this model, one agent is in complete control of a resource but can delegate control to another agent via public functions protected by ‘capability tokens’. While traditional capability-based security doesn’t care who’s making the call as long as they can produce the token, we’ve expanded that model a little bit:

In order for others to call one of their functions, the callee first has to grant access to that function. They do this by writing a capability grant entry to their source chain that specifies the function name, the access level, and any optional information depending on the access level (a random capability token and/or a list of assignees). After that, Holochain will automatically check the credentials of any incoming function call to make sure they match an existing grant. When a grantor wants to revoke or modify access, they simply delete or update that grant entry.

In order to use a transferable or assigned grant, a caller must have already received a capability secret, which they can then save to their own source chain as a capability claim entry. Any time they want to call a function, they retrieve this entry and pass the secret along with the function call. 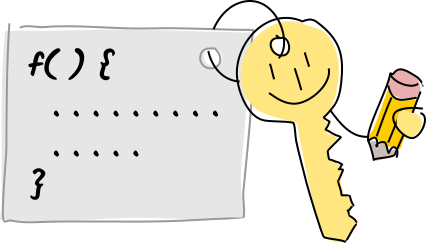 There is one special case where capability tokens aren’t needed: the author capability. If the agent ID of the caller and the callee match, such as with calls between zomes in a DNA or cells whose agent IDs are the same, no explicit capability grant is needed.

At time of writing, client zome calls aren’t protected by capability-based security; the conductor simply applies the author capability to them. This will change in the near future, which means the clients you write will need to be able to get a capability claim from the agent in order to make calls! We intend to make it easy for app developers though.

The lifecycle of a call¶

Here’s an example of how remote calls might work in a blog app that allows people to publish under someone else’s name.

Alice is the world’s foremost authority on octopi who occasionally hires ghost writers to write about her research in a more popular tone. Recently, she’s hired Bob to write a few articles about octopus camouflage. They both use the same blog DNA, whose functions include:

First, Alice needs to let Bob publish posts under her name. Here’s how she does it: