Entries on the DHT are connected to one another via one-way links. They allow you to create a graph database on the DHT, making information easy to discover.

DHTs and graph databases are different from familiar data stores, like relational databases, key/value stores, and document/object stores. Once you understand how they work, you’ll be able to design a robust data model for your app that takes advantage of their strengths and avoids their weaknesses. 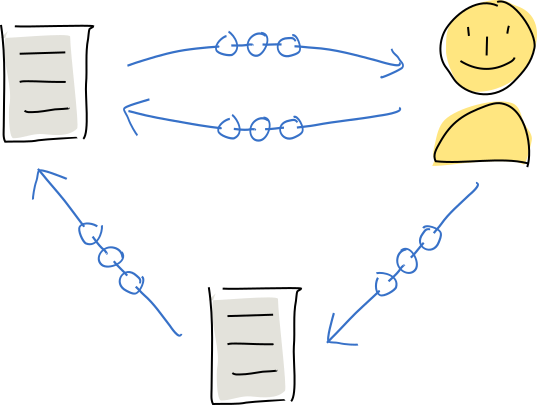 The DHT has one big advantage—you can ignore the physical location of data and ask for it by its content address. This means no broken URLs, unavailable resources, or nasty surprises about what the entry contains.

It does, however, make it hard to find the data you’re looking for. Entry addresses are just random numbers, so they don’t give you any details about what their entries contain. If all data were all on one machine, you could quickly scan through it for a particular substring. But that would get pretty slow on a distributed system, where everyone has a little bit of the whole data set.

This creates a chicken-and-egg problem. In order to retrieve an entry, you need to know its address. But you only know the address if:

Option 1 is an exercise in pointlessness, so that leaves us with option 2. But how do we do this?

A link is stored in the DHT as metadata attached to its base, the entry from which it was linked. The base’s address is all you need in order to get the list of linked entries.

A link has a type, just like an app entry. It can also have a tag containing extra metadata about the relationship or target. You can put whatever you like into this tag, then retrieve or filter it in a link query. This is handy for reducing DHT lookups.

What sort of ‘known things’ in the DHT can be used as starting points?

While you can theoretically link from well known entries like the DNA hash or hard-coded strings, it isn’t recommended. A certain neighborhood of nodes will be responsible for storing all the links on those entries, creating a DHT ‘hot spot’ that will disproportionately tax that neighborhood’s resources as the DHT grows. There are other approaches, such as splitting one anchor into many, based on the content of their links’ targets. For a trivial example, rather than an all_usernames anchor, consider creating one for each letter of the alphabet: usernames_a, usernames_b, etc. Check out our bucket set library for an even better approach.

Take note of the arrowheads above; you’ll see that most are bi-directional, which means they are actually two separate links going in opposite directions. Hard-coded anchors are the exception because they don’t need to be discovered.